In November of 1862, Major General Ambrose Burnside became the Commander of the Army of the Potomac. Burnside’s plan was to make his presence known right away with a decisive campaign against General Robert E. Lee’s Army of Northern Virginia. Burnside’s plan was to move units to the south of the Rappahanock River to keep Lee’s army from blocking the Union Army from moving further south. Burnside sent a Corps forward to occupy and area along the river near Falmouth, where a base of operations could be established in preparation to push through Fredericksburg and towards the Confederate capitol are Richmond VA. The remainder of the Army of the Potomac which had been divided into three “Grand Divisions” would soon follow The Center Division led by General Hooker, The Right Division led by General Sumner and the Left Division led by General Franklin. Pontoons for crossing the river and gunboats were to follow, to make crossing the river easy for the Union forces. 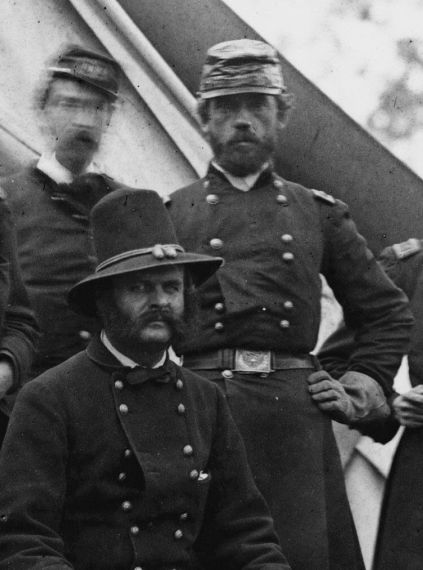 Lee had received intelligence about Burnside’s approach and began entrenching his units on the hills that overlooked Fredericksburg. Burnside’s Army waited on the shore of the river awaiting pontoon boats and gunboats so that his men could cross the river. Nearly 2 weeks after the Army of the Potomac arrived on the banks of the Rappahanock River,  the Pontoon boats arrived. After being set, the Union army began to traverse the river under heavy artillery and rifle fire, the rebels had begun firing as engineers attempted to set the bridges into place. Union artillery also began shelling the town of Fredericksburg to clear out any confederate resistance, as the nearly 100,000 Union forces crossed the river on December 11th and 12th, 1862. 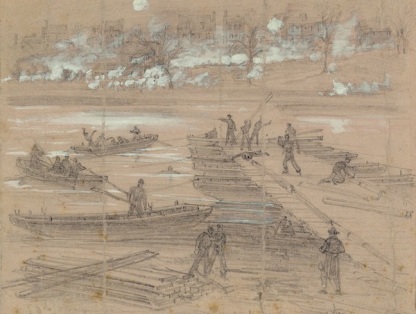 On December 13th, Burnside ordered two frontal attacks on the Confederate lines to try to make some headway. Union forces attacked Prospect Hill and Marye’s Heights, just outside of Fredericksburg. Generals Hooker and Sumner were to make a direct attack on Marye’s Heights, where the Confederates had dug in. General Franklin was to come in from several miles south, and flank the rebels on the right. Burnside’s orders to Franklin were conveyed in vague terms and were poorly executed. While Hooker’s and Sumner’s forces were attacking a heavily entrenched Confederate force head on, Franklin had only sent reconnaissance units down towards the battle. After the Union forces had been repulsed, Burnside ordered further attacks without gaining any further ground. Burnside finally called for the attacks to stop in the early evening. Franklin’s forces never engaged in the battle. In the battle of Fredericksburg over 4 days, Confederate forces lost 4,576 soldiers, Union forces lost 13,353.

In aftermath of Fredericksburg, Burnside would be removed from command of the Army of the Potomac on January 25, 1863, Burnside’s replacement would be General Hooker. The battle itself was a huge boost to the morale of the Confederate army, a morale that would be further emboldened by Burnside’s next attack against the confederacy in January 1863, shortly before Burnside’s resignation and removal.

Greetings! I am Shawn MacIntyre, and I grew up with a love of history. When most kids were watching cartoons I was watching documentaries. After a long career in public safety, I chose to return to college to seek a new career path bringing history to the public. In April 2019. I graduated from Point Park University with a Bachelor's Degree in History, Magna Cum Laude. My new path is to make learning history fun, exciting and accessible to everyone. I invite you to join me on my journeys to historic destinations, learn interesting facts about the past, and spark a love for history! View All Posts